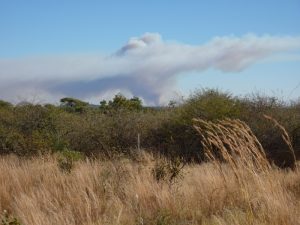 Mercury distribution in topsoils and vegetation samples and temperature-dependent Hg mobilization simulating wildfires have been investigated near a Cu smelter in semi-arid Namibia. The thermo-desorption experiments performed on the representative Hg-rich topsoils indicated that >91% of the Hg was released at ~340°C, which corresponds to the predominant grassland-fire conditions. Despite the installation of a sulfuric acid plant in the smelter in 2015 and a calculated drop in the estimated Hg emissions (from 1301 ± 457 kg/y for the period 2004-2015 to 67 ± 5 kg/y after 2015), the Hg legacy pool in the smelter surroundings will contribute to wildfire-driven Hg emissions until its complete burn-out. Using the Hg spatial distribution data in the area (184 km2), the estimates indicate that up to 303 kg and 1.3 kg can be remobilized from the topsoils and vegetation, respectively.